What does climate change entail for the Netherlands?

As a result of climate change, summers will become hotter, while winters will become milder and wetter. Furthermore, the sea level is rising. Along with the changes in the “average climate”, the extremes will also increase. This means that peak precipitation, extreme heat, extreme drought, and higher water levels could occur more frequently. For example, the intensity of extreme summer downpours is increasing.

What is the Climate Impact Atlas?

The Atlas provides an initial impression of the (future) threats of flooding, waterlogging, drought, and heat in your area. The zoom function allows you to zoom in on your own municipality. Several map layers are available for each of the topics.

The Atlas is based on national data and provides an indication of the order of magnitude of the potential impact on an area. Use of the Atlas is free. It is a logical point of departure for conducting a climate stress test. In addition to local and regional governments, the Atlas is of relevance for, e.g., educational establishments, students, businesses, and residents.

What are the KNMI'14 scenarios and which scenario has been used for the Climate Impact Atlas?

Exactly what our future climate will look like is as yet uncertain. Based on the global rise in temperature, the Royal Netherlands Meteorological Institute KNMI has developed four climate scenarios for the Netherlands. The G scenarios assume a global temperature rise of 1°C by 2050, the W scenarios assume a rise of 2°C. The GH and WH scenarios additionally assume a change in air flow patterns, causing, e.g., summers to become drier. 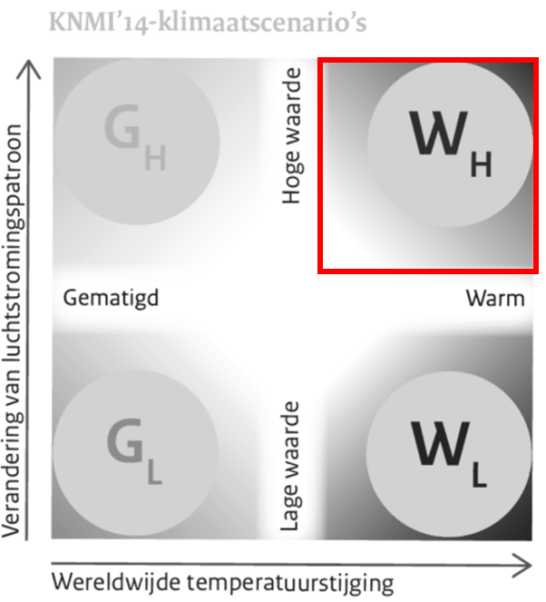 Together, the scenarios reflect the vertices within which climate change is likely to occur. The Climate Impact Atlas is based on the WH scenario. The Atlas thus provides insight into the scenario that in most cases shows the most forceful changes. In some cases, the WH scenario is not the worst case scenario for a particular effect; this is indicated in the explanatory notes to the map under the

More information on the KNMI’14 scenarios is available here.

What kind of information does the Atlas provide?

The Atlas is focused on four themes: urban flooding, waterlogging, drought, and heat. The themes correspond to the themes identified in the Delta Plan on Spatial Adaptation. For each of these themes, several map layers are available reflecting specific climate effects.

The Climate Impact Atlas viewer distinguishes several types of maps. The selection screen in the upper right-hand corner allows you to select the climate effects. Below, you may select maps showing, e.g., sensitive functions and other relevant spatial features. In the Climate Impact Atlas, these maps may be combined to show which areas are vulnerable and explore where adaptive measures may be worthwhile.

The scenario button in the Atlas enables you to compare the current climate (reference period 1980-2010) to the 2050 climate. The check marks next to the climate impact maps indicate which maps are available for the scenarios. Use the scenario buttons

to select the current climate or the 2050WH scenario.

In addition to the viewer with the various maps, story maps are also available. The story maps explain what you see on the map and help you set to work with the information.